On June 7, 1979, President Jimmy Carter recognized the power and influence of Black Music by signing a proclamation declaring June Black Music. Now when we mention Black Music Month you may just think about American Music, but upon further study of Black Music especially Jazz, R&B, or Hip Hop genres its origins absorbed rhythms from the Caribbean, Latin America, & African roots.

This blog post takes a look at the beginning of the SteelDrum (aka SteelPan or Pan) instrument. With this post we hope that people will begin to recognize the contribution that Trinidad and Tobago has made to Black Music. Let's celebrate the SteelPan instrument especially during Black Music Month. Consider this fact, there's no Rock, Country, or Pop music month. As a member of CAISO SteelBand, we consider it an honor to be professional musicians and even more proud to entertain and educate people with our SteelPans.

The following events demonstrate the beginning of the evolution the SteelPan instrument as well as cements the pan's inclusion in Black Music history. These are a few significant developments that contributed to promoting the SteelPan artform as we know today.

So read the events below and increase your knowledge about the SteelPan's birth. Moreover, get aquainted with our Blog Archives. There are several entries that cultivate & amuse music lovers and historians alike, check out a post from February 2011 start there, then surf our "Blog Archive" on the left hand side of our webpage for more Blogs, Music & Videos.

The Caribbean island of Trinidad & Tobago is the birthplace of the Steeldrum Instrument and Steelband music. The Steeldrum also known as the Steelpan has the distinction of being recognized as the latest percussion instrument to be accepted by the music world. Although no one person is credited with inventing the SteelPan, its evolution began in the 1930's. However, we can go back to slavery times in Trinidad, to find the genesis of the art form.

Prior to 1877, enslaved Africans used traditional hand drums to make music for festivities and continue elements of their culture in the "Carnival"celebration. In 1877, the colonial British Government banned playing of traditional drums in effort to suppress the culture of the slaves, political satire & other aspects they felt offensive during the carnival events

Bamboo stamping was used to replace the traditional hand drums after 1877 until the late 1930's. The Bamboo tubes were made in different sizes and produced sounds equivalent to the hand drum, they were played by pounding them on the ground and striking them with sticks. Ensembles were organized and called Tamboo bamboo bands.

Some of the best inventions and ideas occur when you have no other options and limited resources. This holds true for the SteelPan as well. In the early years of the SteelPan, the 1940's, 50's and early 60's, the instrument was not taken seriously by Trinidadians. Pan players were looked down on by the Trinidad elite because the players were from the ghetto and labeled as vagrants or criminals. There were instances of violence between rival bands, instruments were destroyed and people lost their lives for their love of the SteelPan music. Now the negative stigma is gone. In future Blogs we will explore the milestones achieved by innovators of the SteelPan and current SteelPanists that contribute to the worldwide acceptance of the instrument.

This one is personal, special thanks to my Dad Michael King Sr and my Uncles David and Gordon Zephrine for introducing me to the SteelPan. My Dad was one of the former Managers for Trinidad and Tobago SteelBand of Washington, DC.  Uncle Gordon was one of the original members of Howard University SteelBand along with Keith Preddie, George Lawrence, and Ronald Emrit. Uncle David is the Founder of CAISO SteelBand.

During the month of June, we also recognize Father's Day. Just to let you know that in 1966 then President Lyndon Johnson issued a proclamation setting aside the third Sunday in June as Fathers Day. June is a powerful month, we honor men of character that uphold the parental committments and we celebrate Black music, everything from Spirituals to SteelDrums to Hip Hop, Blues or Bass Bounce. So with that said Thank you Dad, Uncle David and Gordan for everything you have done to keep me in touch with the music of my heritage. 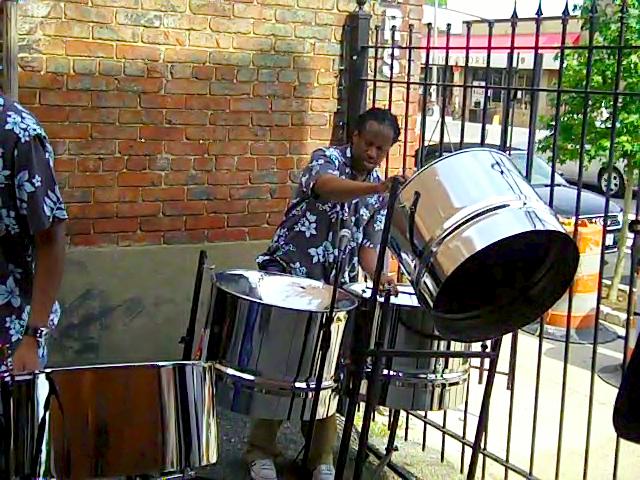 Last week the spectacular DC Jazz Festival kicked off on June 1 and will be continuing through till June 13th.  On June 4th, CAISO was honored to be a part of the DC Jazz Fest, as it is popularly called, by performing as part of the "Jazz in the 'Hoods" event. We performed at O on H Gallery and enjoyed sharing our music with the crowd. The turn out was great and we want to thank all of you that stopped by to enjoy the performance especially Michael Jantz, Shawn Thwaites and Mr. Andrews and his Family. We saw some more familiar faces there and that is always a nice thing.

The event coordinators of the DC Jazz Fest are real pros and the over 100 performances around the city for these two weeks of the festival are top notch. It is a great way to unofficially kick off summer and no doubt it will become a tradition for many. This is the 7th year of the event and the performers, venues, attractions, and scheduling make it appear that it has long been a part of the DC scene. The DC Jazz Festival is definitely an event for the DC area to be proud of and it will continue to please area residents and keep bringing tourists to our proud city.

Below is a quick video to share some of the DC Jazz Festival sights and CAISO sound from our performance last Saturday at O on H Gallery.

If you missed us at the DC Jazz Fest then come out tonight, or any Thursday (weather permitting) to Clyde's of Chevy Chase from 5 to 9 PM throughout the Summer.  This is a perfect way to relax and experience some fantastic food in a great atmosphere with of course THE best Caribbean music!  We can assure you it is always a great time and you will make it a weekly habit once you come out.  It's the place to be on a Thursday night to get that Summer beach feeling flowing through your veins!  Come celebrate all that is good about summer: friends, family, good food, and Caribbean music at Clyde's of Chevy Chase every Thursday with CAISO.  Hope to see you there!

The evening was a huge success due to the careful and expert planning of Mr. Omar McIntosh.  All of those attending remarked what a wonderful time everyone had and how well the event was organized.  We would like to thank Mr. McIntosh for the opportunity to perform and share our Caribbean music with such a wonderful group of people and for such a good cause as to promote the trade and travel industry with Bermuda.

Thank you to the Official Photographer of the event, Moses Hart of AngelHart Photography, for snapping a few photos of CAISO performing.  Here they are…

Till later... We hope there is much peace, love, and music in your life!