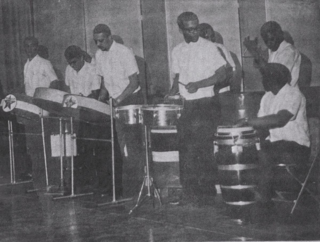 When CAISO member and steeldrum pannist Michael King Jr. looked deeper into the 40 year old history of the band he came across a major historical happening that was perfect to share during Black History Month.  The story is how an electrical engineer student from Trinidad by the name of George Lawrence came up with an idea that would not only benefit himself but other students as well.

Lawrence was a 20 year old Howard University student in 1959 who found himself in Washington, DC with the dream of becoming an electrical engineer and a need to fund his tuition.  He got the idea to gather some steel oil drums and fashion his own steeldrum instruments.  He then found three other Trinidad students at Howard University to join him in forming a true West Indian steeldrum band.  Through playing engagements and also driving taxis the entire band funded their tuition.  The original members of the band that joined George Lawrence were Vincent Lassie, Keith Preddie, Malcolm Weekes, and Eugene Richards. Mr. Franklin Harding and Gordon Zephrine joined the group as they arrived to Howard.

What was amazing about this story is that not only did a young man come up with an ingenious idea to fund his higher education, but in building the band and it's reputation for authentic and unique music from the West Indies the band flourished and sometimes had as many as three events in one evening on their calendar.  At first the members made only $8 per event that they played.  It became a popular entertainment for the social elite of Washington, D.C. who were being introduced to the new instrument of the steeldrum and its music.  The band was so successful that it continued on for many years and once a member graduated from Howard University another student from Trinidad took the open spot with the band and earned money for their education at Howard University.

The story was so inspiring and unusually unique in its subject about a student band using steel drums to make music and pay their tuition through college that the story received lots of attention.  In the December 1963 issue of Ebony Magazine there was a feature story entitled "Playing Their Way Through College: Howard Univeristy Students Put Talents to Work" about the original members of the band and their story.  The pictures accompanying the article are quite interesting to see as the students perform with their steeldrum instruments for events.  The entire article can be viewed by following the link above.

Not long after forming the Howard University Steelband it got the attention of the Texaco Oil Company which chose to sponsor the band and pay the band member's tuition.  The band had many major performances including the Presidential Inaugural Parade for President Richard Nixon and events that included Congressmen, Dignitaries, and celebrity performances by entertainers such as Jimmy Durante and the Count Basie Band.

There are many well known steel pannists that emerged from the Howard University Steelband that went on to form or perform with the Trinidad and Tobago Steelband of Washington, D.C. (a.k.a. T-N-T Steelband), one being the well known and regarded Ronald Emerit.  While others went on to form and join other steeldrum bands, such as C.A.I.S.O. And PanMasters Steel Orchestra.

The C.A.I.S.O. Steelband would like to celebrate and salute those young men from Howard University who brought the concept of the steeldrum and its music to the Washington, D.C. area.  Their ingenuity helped many achieve college degrees, and their music helped pave the way for those still playing the unique music of the steeldrum for the DC area.