Remembering on Memorial Day and Recapturing Its True Purpose 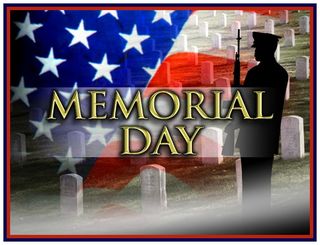 Memorial Day is a National Holiday and one that marks the transition into summer for many.  Unfortunately much of the holiday has been lost and replaced with the celebrations that go hand in hand with a long weekend.  It is time to once again capture the meaning of the holiday and the purpose of the day which is reflection and gratitude for the lives of those lost while serving in the U.S. armed services.  It is not to be confused with Veterans Day which celebrates the service of all military personnel both living and dead.

Many are unaware that there was an official “National Moment of Remembrance Act” passed by Congress and signed into law by President Clinton in 2000 to form the White House Commission on the National Moment of Remembrance.  There is encouragement for all Americans to pause wherever they are at 3PM local time on Memorial Day for a minute of silence to honor and remember all military service men and women that died in service to their nation.

By sharing the knowledge of this Memorial Day Remembrance Event you can help encourage others to honor our fallen heroes.

A great place to spend Memorial Day, Monday, May 28 is in the DC area.  On the Thursday before Memorial Day soldiers will be placing American flags in the front of every gravestone in Arlington National Cemetery.  Monday will mark an especially touching wreath-laying ceremony at the Tomb of the Unknown Soldier.  The U.S. Army Band will conduct a grand parade at Arlington after the wreath-laying ceremony.

The eve before Memorial Day, Sunday, May 27th, from 8:00 to 9:30 pm ET on the West Lawn of the U.S. Capitol there is a free Memorial Day Concert with special guest artists sponsored by PBS with broadcast on the PBS network.  The concert includes the National Symphony Orchestra as well as other groups and singing artists such as Chris Mann and Katherine Jenkins.  Colin Powell is slated to speak about the meaning of Memorial Day and there will be other appearances including Joe Mantegna and Gary Sinise.