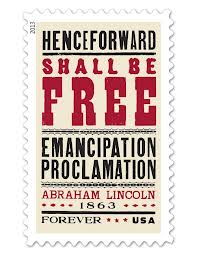 Abraham Lincoln signed the proclamation on January 1, 1863.  The US Postal Service released the first of a series of planned special commemorative stamps on January 2, 2013.  The first one limited edition stamp was to commemorate the signing of the Emancipation Proclamation and the other two were released later that year and will commemorate the March on Washington and Rosa Parks.  These are limited edition stamps with special first day release sheets of the stamps and other items which can be purchased at the USPS Web site or through your local post office.

Visit the Martin Luther King, Jr. Memorial to commemorate the life of a Civil Rights legend.  There are special events held nationwide at most colleges, museums and other venues.  Even if you are not in the DC area there are likely many events held near your own town to celebrate Black History month.

Another special event will be held on February 20th aboard the Spirit of Washington.  There will be a special “Black History Month Lunch Cruise”.  The music featured on the cruise will be centered on celebrating African american music artists which will involve both live music and that offered by a DJ.

We will share more detailed information with you on upcoming events including those that will involve CAISO.  We hope you will come back and visit us often for this information and much more!

View the unveiling of the Emancipation Proclamation Commemorative Stamp Event: