« Bridal Guide on How to Look and Feel Your Best on Your Wedding Day | Main | Wedding Planning: It’s Time to Get Serious »

Marking 37 Years: Up Close and Personal with the Archives and Memories of CAISO

CAISO is about to mark an anniversary and with one as monumental as a 37th year anniversary it is fitting to visit the history of the band.  In a brief interview with different band members, both past and present, what follows is an interesting glimpse into the history and much of what makes this band an exceptional asset to the DMV area.

CAISO has been around for 37 years now, who were the founding members of the band and were they located in the DC area as the band is now? Our original members respectfully include Sam Brown, Godfrey Clark, Oswin Finley, Michael George, Carlyle Oliver, Broderick Robinson, and David Zephrine. The group first gained its fan base by performing at the Pier One Club in Annapolis and the Ocean Club in Ocean City, MD. 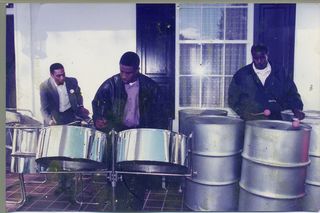 From CAISO Archives: Some of the original members of CAISO

Are there different types of steeldrums?
Yes.  There are several types of steelpans that are classified by the pitch or range of tones: Soprano pitch-tenor pan, Alto-double Seconds, Baritone-Cello, Double guitar, Triple Guitar, Bass-6 Bass, 9 Bass

What brought you to find interest in the steeldrum and how long have you been playing?
David Zephrine - I grew up around the instrument and developed an interest naturally.  Everybody at that time was interested in playing the instrument.  Ijoined BWIA Sunjet Steel Orchestra (BWIA national airline of the Trinidad & Tobago) at first.  BWIA Sunjet was formerly known as WestSide Symphony SteelOrchestra.  WestSide Steel Orchestra was an offspring of PanAm NorthStars.  While with BWIA Sunjets we traveled all over the world to perform and we proudly represented Trinidad & Tobago.  The band performed at Radio City Music Hall with the Rockettes in 1965, Canada, and Sweden.  (David has played the steelpans for 50 years and migrated to the US in 1969 to attend school and pursue music career.) 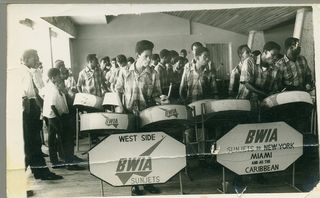 The music of a steeldrum band has a distinct sound and is a very "happy and joyful" type sound, do you find it easy to get your audience feeling your music?
Yes.  People like the music so much because it is relaxing and it is for people to envision themselves on the beach and transport themselves there in mind and heart.  It can be relaxing and even theraputic for some people.

Do you see a continued interest in the steeldrum by youth within the US?
People in US and in the world are getting more exposed to the instrument.  The steeldrum/steelpan is being taught in music school, high school, colleges, and universities in US and abroad.  People have begun to accept the steeldrum as a new instrument in the music world.

Sherwin & Shawn Thwaites were the first students to graduate from Berkelee College of Music with the steelpan as their primary instrument.

Locally in the DC area there are several high schools that have a steelpan band and they are Northwestern and Old Mill.  There is also the group CAFE and they are a youth organization that promotes steelpan instrument and academic enrichment in Prince George's County, Maryland.

How would one go about learning the steeldrum and buying one?
There are local music schools that teach the instrument.  Best bet is to search out schools in your area.

Being in a band requires quite a commitment, you are often performing on weekends and holidays, what makes you want to commit to the schedule experienced by a live band?
The love of performing andplaying the instrument.  The reaction you get from playing the instrument in public and bringing something special to their event.  In addition we are sharing the culture of Trinidad, so it feels good to educate and entertain people.

Do you have a funny story that you would like to share about an event in which you played?
At one gig we had a dog dancing on its hind legs to our music.  At another a gentlemen stated to our percussionist that he had never heard someone playing the cowbell and have the ability to make it talk.

With a band that has been in existence for over 30 years, some have surely retired and new members have come into the band.  Who are your newest members and how long have they been with the band and what do they contribute to the CAISO brand?
Orin Richards is our newest member, he is a keyboardist, bassit, and vocalist. Orin has been with the band for less than a year.  So when clients want a vocalist we can provide that along with our steeldrum sounds. 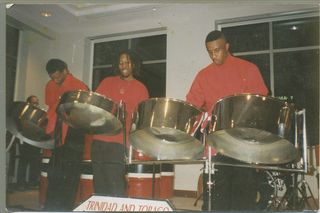 From CAISO Archives: Early days of CAISO as the Trinidad & Tobago Steel Orchestra of Washington, DC

CAISO has been a high profile band in the DC area, it is unique that you have so many members that you can entertain in different types of venues such as political dinners for dignitaries, weddings, public events, and product branding for restaurants.  How does CAISO handle such a wide range of entertainment needs and do so successfully?
Very carefully.  David Zephrine is the manager and Michael King assists him with booking coordination and customer service.  CAISO works with several booking agents, event/wedding planners, copywriters, and networks within the SteelPan Community to develop new gigs, and talent.  There is never a shortage of interest for our band and lately we opened up more dates in our calendar to enable CAISO to accommodate more clients and events.

What public events do you have planned that people could mark on their calendars in the months ahead to see CAISO perform live?
We are performing at 2017 season opening for Tiki Bar Solomons Island. Of course as in years past there will be many public events in and around the DMV area in which we will perform and the best way to find out where we will be is to check our blog and follow us on

listen to samples of our music: