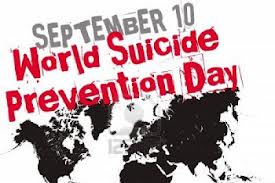 800,000 people die worldwide due to suicide. 1 person commits suicide every 40 seconds worldwide. The annual number of lives lost to suicide exceeds the number of deaths due to homicide and war combined according to the International Association of Suicide Prevention.

When i’m not performing with Caiso Steelband, I work as a licensed mental health therapist at a special education school for emotionally disturbed adolescents in Wheaton, Md. For the past 12 years, I have served mental health consumers in Washington, DC, Maryland and Virginia. Over my career, the toughest sessions have been providing grief and loss therapy to individuals that have lost love ones due to suicide.

September 10th is World Suicide Prevention Day. Suicide is a major public health problem. I am on my soapbox to help address this epidemic. Raising awareness on this issue can help save lives.  There are suicide awareness and prevention programs locally in the DMV and internationally.

See content below, we have shared links to songs that inspire life and reflection in order to discourage suicide. In addition, you'll find links to local and international agencies that promote resiliency and hope to eliminate suicide in our society.

"Make It Stop" - Rise Against (the song was written by the singer's nephew after his Gay best friend committed suicide due to bullying. The end of the song mentions some of the 34 bullied kids who killed themselves in 2010)...

Others are... "Coming Down" - Five Finger Death Punch

This is why I hate the current mainstream because videos like these don't get out to people who really need them.

For a song about missing someone, you could try "So Far Away" by Avenged Sevenfold. It was written for their late drummer, Jimmy Sullivan, who passed away from an overdose in '09. It's since been debated whether his death was an accident or intentional (he suffered from a heart condition), though this song kind of makes me think the latter. The line, "I love you, you were ready, the pain is strong and urges rise. But I'll see you when He lets me, your pain is gone, your hands untied" seems to fit your situation...

If anyone reading this post has been effected by suicide, I am sorry for your loss and I hope these songs can offer a little comfort to you and your family.

Have you experience the harsh reality of suicide? The world stats are mindboggling. This epidemic is not going unnoticed. For more info about international and local efforts to eliminate suicide in our society follow the links below:

Suicide prevention in DC: I am the Difference

from our blog archives...Music is Therapeutic and Studies Prove it is Beneficial to Humans, Pets, and Even Plants