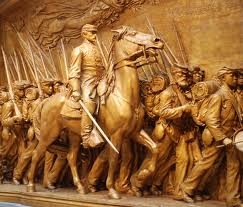 This year marked the 150 year anniversary of the signing of the Emancipation Proclamation.  It was only months following the signing that the first African-American unit of Northern Union Soldiers organized and fought in the Civil War.  The 54th Massachusetts Regiment fought in South Carolina at Fort Wagner and the group was honored with a memorial on the Boston Common 116 years ago.  The bronze Shaw Memorial was erected to honor Col. Robert Gould Shaw, the leader of the regiment who died in battle and the soldiers of the 54th.  The design was by Augustus Saint-Gaudens and the original plaster for the bronze memorial won a grand prize for sculpture at the 1900 Universal Exposition in Paris.  It is considered to be one of the finest examples in the world of 19th century American sculpture.

This week was the opening of the “Tell It with Pride” exhibition at the National Gallery of Art in Washington, D.C., which will display the original plaster sculpture of the Shaw Memorial.  The exhibit will conclude on January 20, 2014.  The exhibition will explore the soldiers honored by the memorial that were a part of the 54th Massachusetts Regiment.  Photographs, writings, and other items of interest will be available for viewing that were gathered from across the country highlighting the soldiers and their service in the Civil War.  One item of interest is the original copy of the Emancipation Proclamation that was sold to raise funds for the Union troops.  The first Congressional Medal of Honor awarded to a black soldier after the battle at Fort Wagner will also be on display at the exhibit.

Items from the writings of Fredrick Douglass, Sojourner Truth, and Harriet Tubman will also be a part of the exhibit.  Fredrick Douglass was a recruiter for the regiment and had two sons that served.  Sojourner Truth recruited men from Michigan for the 54th and had a grandson that served in the regiment.  Harriet Tubman recruited soldiers, served as a nurse to the 54th and was present at the battle of Fort Wagner.  In total there were men from 15 states, including all four border states, five Confederate states, Canada, and the West Indies and numbered above 1,000.  The battle was grueling and the Union suffered defeat but the story of the 54th regiment inspired many and has endured.

Sarah Greenough, curator of the exhibit, remarked at a preview, “Until President Abraham Lincoln signed the Emancipation Proclamation on Jan. 1, 1863, none of these African-American men had been allowed to wear the Union blue; none had been allowed to carry a gun to defend their country; and even their very bravery and their dedication to their country had been questioned.  Yet their heroic stance at Fort Wagner began to silence such questions.”

In a letter to the Shaw family from an anonymous writer announcing his death, the writer noted that the story of the 54th was honorable and to “tell it with pride to the world”.  It is that letter that lends itself to the title of the exhibit “Tell It with Pride”.

Not only did the men fight heroically on the battlefield but they battled for equal pay.  They held out for equal pay to that of white soldiers they fought alongside.  When their promised pay was reduced from $13 monthly to $10, they refused to accept pay.  Doing without pay for up to 18 months, they finally were awarded equal pay.  A third of the soldiers were killed in battle, wounded or reported missing by the end of their service.

The artist of the Shaw Memorial, Augustus Saint-Gaudens, used photographs to sculpt Shaw but he used various live models in his studio to depict the soldiers of the 54th Regiment.  The sculpture continues to inspire artists to this day and is considered a treasured rendering of history in action.

The story of the 54th Regiment was depicted in the motion picture “Glory” and stared Mathew Broderick as Colonel Robert Gould Shaw and also stared Denzel Washington, Morgan Freeman, and Cary Elwes.