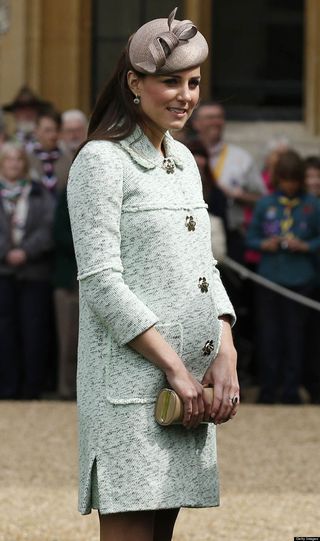 While celebrity births often burn up the news for days and people can’t seem to get enough of the baby news there is perhaps no baby more awaited into the world than that of the new royal heir to the British Throne.  Prince William and his wife, the Duchess of Cambridge, Catherine “Kate” Middleton are due to welcome their first child into the world in the middle of July.  Since no official due date was announced, the day could be any day in July and the media are not missing the chance to be the first to tell you the news.  Already media are lined up outside the hospital as are well-wishers who want to say they “were there” when the new monarch arrived into the world.

The St. Mary's Hospital’s exclusive Lindo Wing in London is the chosen place of birth and once the new child is born it will be third in line to the throne.  The preparation for the child to take on the responsibility of being either Queen or King of England was taken into consideration last year when the pregnancy was announced.  The government put into place a new ruling that would allow the first born child to be the rightful heir of the throne no matter the gender.  The old ruling of the first male heir to be the next in line to the throne was dropped in favor of either a male or a female heir.  So no matter the gender of the royal baby, it will eventually be the King or Queen of England someday and will be next in line to the throne behind Prince Charles and Prince William.

Kate Middleton has taken some traditional stances on the birth while she is definitely a modern mother and accepting new ways of bringing in her first born into the world.  The name will likely be very traditional and will follow royal naming traditions.  Those betting on the chosen name are preferring Diana, Elizabeth or Victoria for a female and Edward, Charles or Henry for a male child.  The baby will be born in the same hospital that Prince William and Prince Harry were born when their mother Princess Diana gave birth to them.  The baby will likely be seen publicly fist from the steps of the hospital and again at the balcony of Buckingham Palace once the family leaves the hospital as is tradition.

Kate is rumored to be undergoing natural birth preparedness which was outside the scope of traditional births of the royal family.  Pain management hypnosis was rumored as one method of helping her through the natural birth.  Kate is also rumored to have been busy selecting just the right music to play in the birthing room and is expected to share her playlist with the public after the birth.

Music can play an important part of a birthing experience and with so much to consider prior to a birth, many will miss the opportunity to combine a playlist of music to help them through this wonderful life event.  There are playlists published online and many compiled music albums available on iTunes and other music sites that are specific to childbirth.  However, there are some that are using a birthing playlist to make the event special for friends and family members.  By asking everyone to contribute one song of their choice to the playlist for the mother to use during her labor, friends and family can be a part of the special event. The list can then be compiled and noted in the child’s scrapbook or baby book for future reference.  What a fun way to get everyone involved.  Perhaps a nice steeldrum tune could offer the mother a visual diversion of soft sand and quiet surf as she relaxes.  Get your free CAISO download here: Free Music Download.