Wedding and bridal fashion has trends just as any other fashion might.  The Royal Wedding last year has prompted a return to traditional bridal gown designs as well as a spark of nostalgia and romance.  Designers are offering up a whole new influence that hasn’t been seen in decades.

Lace is becoming the keyword in bridal fashion for the coming seasons.  Influences by Hollywood starlets of bygone eras such as Vivian Leigh and Betty Davis are making an impact on designers.  Consider the beautiful necklines in the gowns worn in “Gone with the Wind”  or Audrey Hepburn’s gowns in “Sabrina” and the silhouettes will mimic what designers are bringing out for Brides to choose from for their special day.

Brides are no longer wanting to make that grand entrance that will turn everyone’s head and drop jaws by the mere design, but rather they are choosing designs that fit into the entire mood of the wedding and denote romance, taste, and timeless elegance.  They want their gowns to speak of the entire event and not just the Bride’s tastes alone apart from the event.  If one considers the dress worn by Kate Middleton in last spring’s Royal Wedding they can see the impression a gown can have on an event if it portrays the entire wedding in the design and fabric, along with an heirloom profile, neckline, skirt and train. 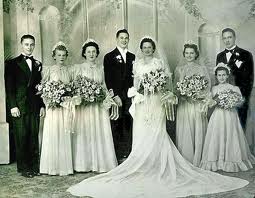 The return to romance and tradition is leading many Brides to ask to see their Mother’s or even their Grandmother’s gowns if they are lucky.  Seeking out a talented seamstress to bring the gown to a custom fit and updated draping or neckline will make use of a gown that is a priceless heirloom and treasure.  Designers can only copy and try to bring about the nostalgia of an heirloom design but those that have the opportunity to use a vintage family wedding gown should not pass up the chance to do so.

Longer veils are coming back into fashion and Brides can definitely set their fashion statement of romance, tradition, and elegance through a long flowing veil attached to a fresh flower headband or a family heirloom hair comb once worn by Grandmother.

Brides will find that the use of heirloom pieces in their wedding ensemble offers the opportunity to save money while being dressed in a priceless fashion item.  If there isn’t an heirloom wedding gown or veil to choose from then perhaps a visit to a vintage clothing store can offer up a treasure.  Be prepared to find competition in searching for a vintage wedding gown as Brides seek to find vintage gowns to redesign and make it their own rather than wear a “cookie cutter” designed gown that can be ordered from a bridal salon.  This is pushing up the cost of vintage wedding gowns that once were hard to give away at yard sales in years past.  Now they are the new fashion find worth thousands in some instances. 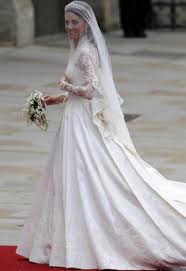 Brides looking to be on the edge of upcoming Bridal fashion trends will do well to think lace, conservative necklines, with fitted waists and fuller skirts, all with vintage, and heirloom influences.  Brides choosing to take advantage of these new trends will be making a unique statement much like Kate Middleton did last spring.  The impression will be long lasting as that Bride leaves thoughts of romance and elegance in the minds of those attending the wedding and the pictures will represent a timeless and fashionable Bride as the years pass by.

PICTURE YOURSELF IN A NATIONAL PARK this April 21 - 29 as America celebrates National Park Week –– a chance to hike, learn, share, and give back in the nation’s 397 national parks. Each year, we take this time to celebrate what we all have inherited as Americans – 84 million acres of the world’s most spectacular scenery, historic landmarks and cultural treasures.

Read entire article and go visit our National Parks.  We love performing at Rock Creek Park in Washington DC, we performed there summer of 2011 for a charity event.

Steel drum bands play their unique music and carry one’s thoughts to places with ocean waves lapping up onto the sandy shore.  When one takes a vacation to the Caribbean Islands they expect to hear the music played with pride as well as one would expect to hear it at any of the ocean shores in America.  Where one would not expect to hear an award winning steel drum band playing is in Georgia but that is exactly where you will find the Trion High School Steel Drum Band.

The Trion High School has an after school ensemble that concentrates on teaching not only steel drum players but top performing ones as this steel drum band is ranked third in the World.  The program is headed by band director Andy Cox.  Mr. Cox says that the band has had the honor of having people travel from far distances to hear them play and that they have also traveled far to perform.  Many people in the area have not had a steel drum band perform live and once they do they become instant fans of both the band and the music itself.

Students are quick to point out that while the music may be carefree and easy and that they often make the task look easy that steel drum playing is challenging.  Alex Hatley, a senior with the steel drum band from Trion High School, said, “It may not sound hard, but it is.  Part of what makes it fun is being challenged musically.”  Ms. Hatley also plays an instrument in the marching band at the school but she credits the steel drum with giving her a higher appreciation for music.  Her love for the steel drum is leading her to choose Jacksonville State University after graduation where they have a highly regarded steel drum program along with a famed marching band.

Senior Aaron Castro, is a drummer in the school marching band and notes that he still has long hours of practice needed to accomplish his level of performance on the steel drum.  He said, “Most of the drum notes are written on the drums, but mine does not. When people first start they don't know what they're doing, or what their notes are, but the more you do it, the better you get.  It takes a lot of practice.”

Band Director contributes the steel drum band for bringing recognition to the school of its music program and he is expecting a larger band room in the future as well as instruments to train students as the program expands.  This is a contradiction to the music programs of many public schools which are losing funding.  The steel drum is helping students to see a future in music as well as a ticket to a higher education.

Ms. Hatley summed up her appreciation for the steel drum in this way, “This has done a lot for people's awareness of our school.  They say we have an awesome steel band. I'm proud of that because it gives Trion High School a lot of good attention.”

For information on the steel drum feel free to contact CAISO.  They perform in the DC, Baltimore, and Virginia areas.  For more information see: Contact CAISO or see CAISO Booking Information.