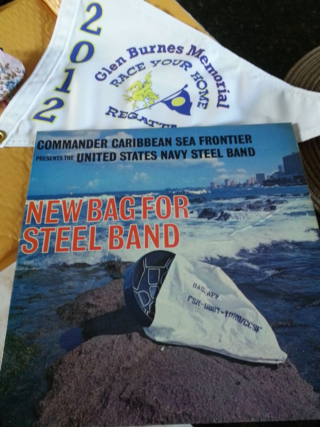 In 1977, a man was laid to rest that lived a life and accomplished so much that it could not be summed up in few words. He was a graduate of the esteemed U.S. Naval Academy from which he graduated a year early, he served his country for 43 years with many accomplishments rising to the rank of Rear Admiral, was a member of the 1920 U.S. Olympic wrestling team, at one time a daring navy jet pilot, later a revered Captain of USS Guadalcanal which under his command captured the only German submarine to be captured and boarded at sea which offered up secret maps, code books and other information that played a part in the allied victory, he is the author of several books, and is well known as a military hero and accomplished man of honor. He is also known as the "Father of the Navy Steel Band".

It was in February 1957 that Rear Admiral Dan Gallery, USN ret. (1901 - 1977) first heard the sound of the steel drum while attending the Carnival in Trinidad. He so enjoyed the music that he immediately ordered sixteen steel drums to be built and paid $120 for them. Upon returning to his headquarters, which at that time was located in San Juan, Puerto Rico, he informed the Chief Musician Charles A, Roeper of his purchase. Chief Roeper was the leader of the Admiral’s conventional band. He ordered for Roeper to have the 18 members of the band to put aside their instruments and learn to play the steel drums. He intended that they would play the drums exclusively and become the Navy’s pride, the Navy Steel Band. 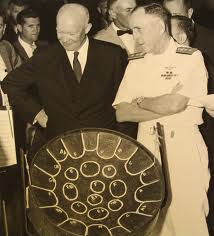 The Admiral arranged for the band members and Chief Roeper to travel to Trinidad to obtain the new steel drums. While there they received instruction from the legendary Ellie Mannette, known as the "Father of Steel". The 18 members quickly picked up the steel drum for they were accomplished and professional musicians who knew how to read music. Once they were finished with their intense training with Mannette, they returned to San Juan and called themselves "Admiral Dan’s Pandemoniacs". The band was made up of several types of steel drums giving a range of music notes. They also used a bonga-bonga drum, maracas, claves, and other rhythm instruments to accompany the steel drums. (Photo: Admiral Gallery and President Dwight D. Eisenhower with one of the steel drums used by the Navy Steel Band)

The band built a diverse repertoire of songs that included meringues, cha-chas, sambas, rhumbas, and traditional calypsos. Chief Roeper was very talented at adapting well known songs to be played on the steel drum. This diversity is credited with being a large part of the band’s popularity. They achieved worldwide fame and released 11 albums. The Navy Steel Band remained in Puerto Rico until 1973 and then they were stationed in New Orleans, LA. The move to New Orleans allowed the band to add more tour time and between 1973 and 1979 they traveled over 1.5 million miles and performed 500 concerts a year. The Navy Steel Band remained the only U.S. Military Steel Band until they were disbanded in 1999. They remain a legendary steel band long after. 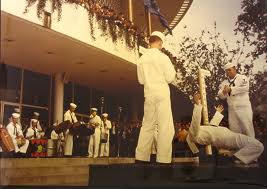 We would like to thank Dr. Andrew Martin and The New York Folklore Journel for facts and data used in this blog post about the Navy Steel Band

What a wonderful story! I'd never heard of this before.

Gallery was definitely one of a kind. There's a bit of a mix-up in the brief bio above, though: "..at one time a daring navy jet pilot, later a revered Captain of USS Guadalcanal..." The capture of the U-505 by TG 22.3, with Gallery commanding the Guadalcanal, took place in 1944, long before the U. S. Navy had operational jet aircraft, and Admiral Dan's flying days were pretty much over by the time they got them. He was a hot pilot in his day and did win the National Air Races in the late 1930s, flying, of all things, a race-tuned Douglas TBD Devasator. As a measure of his original thinking, his plan to capture a U-boat was actually hatched in 1942, when he commanded the fleet air base at Reykjavik, Iceland, and the original plan called for capturing the sub with a PBY, which makes his later success using an ASW task group pale by comparison. He probably would have gone on to retire as CNO had he not been one of the most vocal leaders of the Revolt of the Admirals, writing a series of articles for the Saturday Evening Post that more or less single-handedly scuttled the plans of then-President Harry Truman and Secretary of Defense Louis Johnson to cut the Navy to a convoy escort service and fold the USMC into the Army. Essentially, Gallery sacrificed his third star and his career to save the Navy and the Marine Corps and narrowly escaped a court-martial. In light of later events, he may well have saved the nation as well. He deserved better.