As 2011 comes to a close, we like to reflect on the major events over the past 11 months. I found The 45 Most Powerful Images of 2011 via buzzfeed.com.

Caiso SteelBand are thankful for having great fans and clients to work with during 2011; we are looking forward to performing at weddings, corporate and community events during 2012.

To see the rest of the images click: The 45 Most Powerful Images of 2011 which includes fascinating images from the Tsunami in Japan, 9/11 Memorial, and National Security Team during the Osama Bin Laden misson.

As a thank you Gift from Caiso SteelBand we would like to give you Free SteelBand Music. Visit our Free Music Downloads

Bonus Image: You won't find this one on CNN or BuzzFeed.com Michael King Jr of Caiso SteelBand (on right) and Stephen King. Both brother are members of Alpha Phi Alpha Fraternity, Inc. 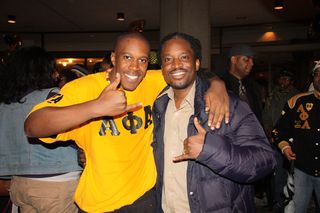