PhotoBlog - A look back at Pearl Harbor attacks 70 years ago

Seventy years ago, a Japanese air and naval assault on Pearl Harbor in Hawaii claimed 2,390 American lives and propelled the U.S. into World War II. Nearly half of those who died were sailors aboard the USS Arizona, which was sunk by Japanese torpedoes, killing 1,177. Survivors of the attack describe the day. 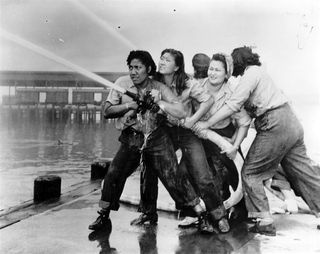 Women firefighters direct a hose after the Japanese attack on the US naval base at Pearl Harbor.

There are many Commemorations taking place today around the country to mark the 70th anniversary of the attack, as well as memorials for servicemen who survived the attacks but whom, after their recent deaths, wanted their remains placed at Pearl Harbor. Also, a new exhibit about the attacks is opening at National World War II Museum in New Orleans.

As always we thank you for visiting our Blog. For the U.S. Military Navy History Lovers ONLY! Did you know the US Navy had an Official SteelPan Orchestra?