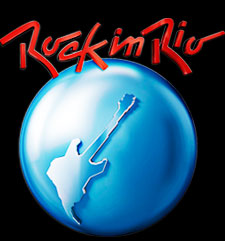 What started in Rio de Janeiro, Brazil in 1985 has come home again in 2011 after a 10 year absence.  The "Rock in Rio" started this past weekend and will conclude on October 2.  It is considered the largest music festival in the world and is expected to draw millions of music fans.  The first event held in 1985 is estimated to have had 1.5 million fans and headlined some of the biggest acts of the day, including:  Queen, Iron Maiden, Whitesnake, George Benson, James Taylor, Al Jarreau, Rod Stewart, Go Go's, AC/DC, and many others.

The opening act of Queen as well as one of their other performances later in the festival was recorded and watched by 200 million people in over 60 countries and was later released on MTV as “Queen: Live in Rio”.  The live audience for the performances each night was over 325,000 and became a world record for the biggest paying audience to witness a live music event.  Other records were broken during the time including one by McDonalds which sold 58,000 hamburgers in one day.

Opening the 2011 event on Friday a recording of Queen from Rock in Rio 1985 was played to kick off the beginning of the performances for the festival and was greeted by a standing ovation from 100,000 plus in the crowd.  Then event is expected to bring in over $450 million in revenue to the city and to create 10,000 jobs both directly and indirectly.

The event has not been held every consecutive year since 1985 nor has it been held exclusively in Rio de Janeiro.  What has been consecutive for the event is that it draws very large audiences as well as the top performing artists of the day.  Other acts over the years to perform have been Elton John, Prince, New Kids on the Block, Billy Idol, Run DMC, George Michael, Sting, Guns N Roses, R.E.M., Red Hot Chili Peppers, Brittney Spears, Neil Young, Sheryl Crow, Dave Matthews Band, and others.

The 2011 Rock in Rio has among the confirmed artists Elton John, Katy Perry, Rihanna, Metallica, Red Hot Chili Peppers, Joss Stone, Ke$ha, Stevie Wonder, Lenny Kravitz, Shakira, Maroon 5, Coldplay, Guns N Roses, and many, many others.  The area of the festival will be the site of the 2016 Olympic Village and is dubbed “City of Rock”.  Over 100,000 people are expected each day of the festival and this is considered a warm up of sorts for security efforts that will be needed for the 2016 Olympics and 2014 FIFA World Cup, both to be held in Rio de Janeiro.  Live streaming of the event can be watched on YouTube.

Tickets are sold out but some are being sold on the secondary market.  More information about the festival can be found on the main Web site for Rock in Rio.

You can keep up with Rock in Rio on Twitter by following them at @RockinRio and by searching the hashtag #RockInRio.